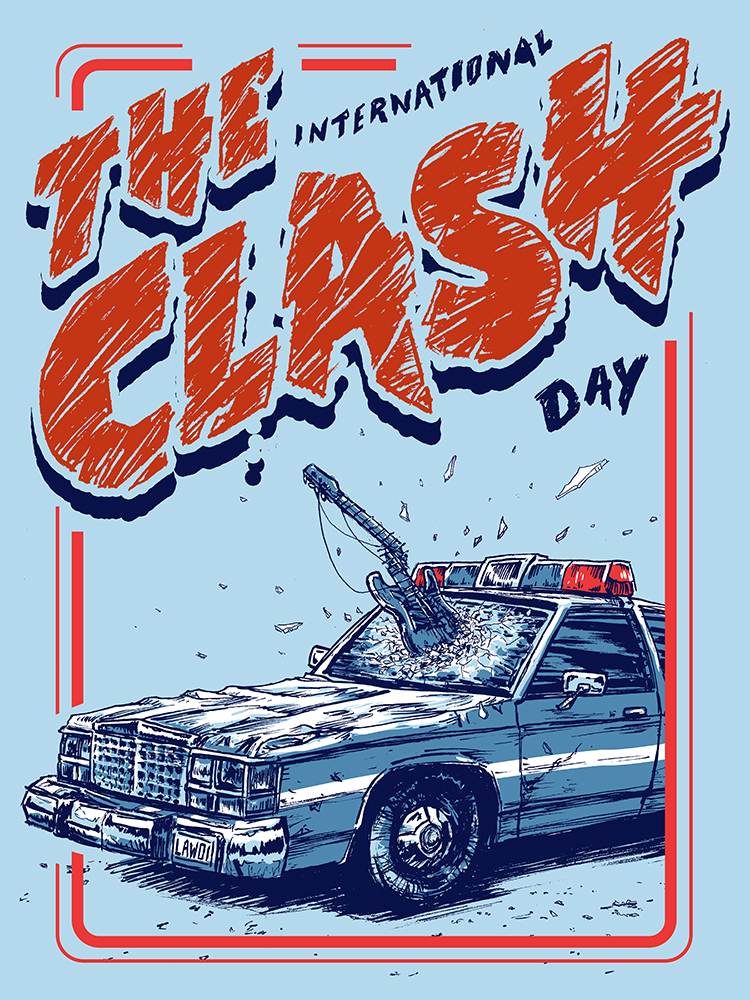 On February 7th, 2017 the world banded together to celebrate the music and message of The Clash by observing the fifth annual International Clash Day. KEXP in Seattle, WA, along with over 20 radio stations from across the United States, joined stations from Australia, Canada, Ireland, New Zealand, and the U.K. to honor The Clash with twelve hours of the music that inspired the band, and in turn they inspired, and how protest was central to their message of hope and change.

“The message of The Clash, so influenced by the international sounds they grew up with, is both powerful and uplifting especially now in this time of struggle,” said KEXP Morning Show host and International Clash Day originator John Richards.

Mayors and distinguished officials from the cities of Austin, TX, Ithaca, NY, Kent, OH, San Francisco, CA, Seattle, WA, Tucson, AZ, Vancouver B.C. (Canada), Bridgwater (UK) and Washington D.C. alongside the governor of the State of Washington all proclaimed February 7th as International Clash Day. These local governments all chose to celebrate The Clash and the message behind their music and their contributions to our cultural fabric. 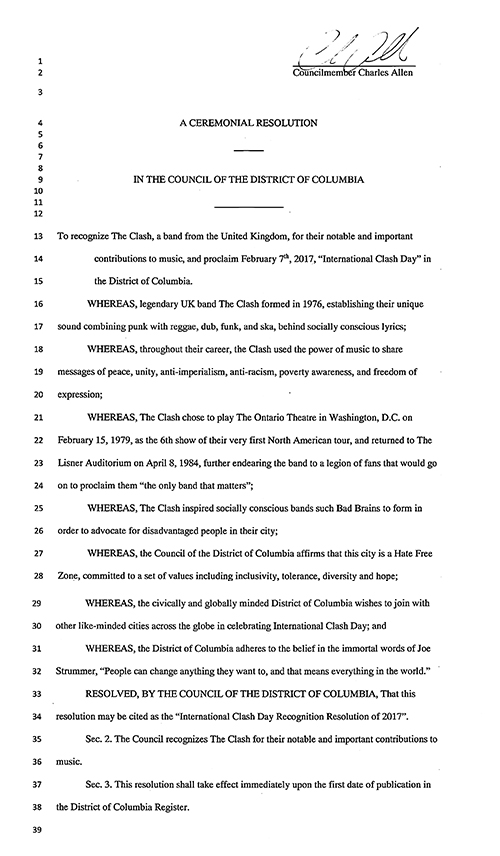 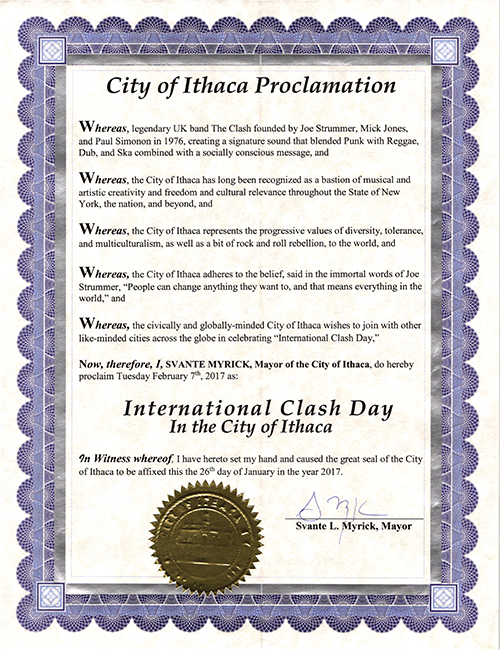 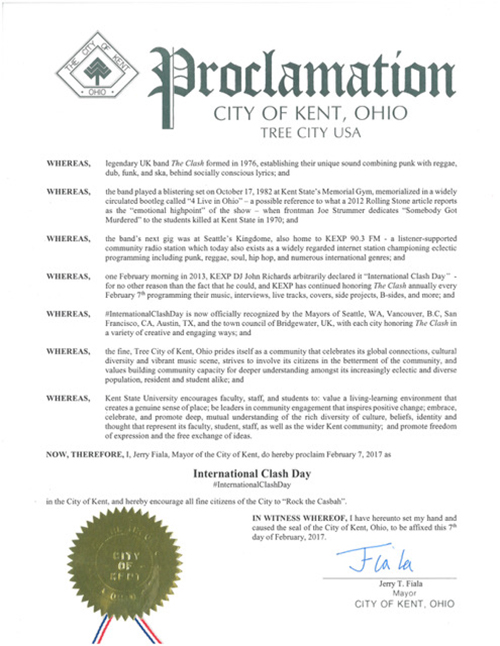 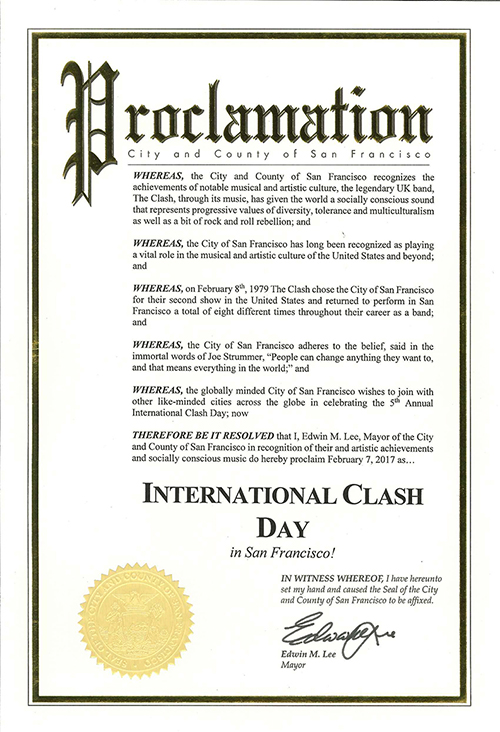 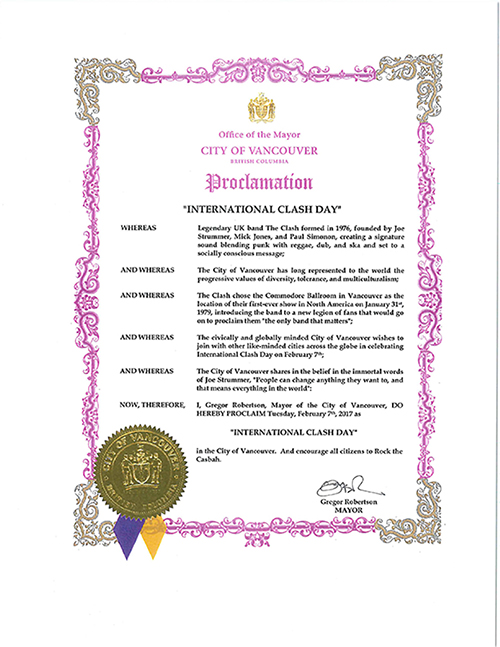 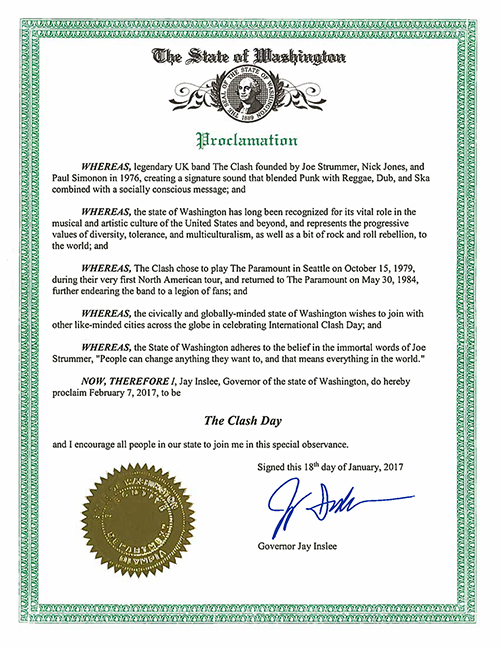 The legacy of Joe Strummer and The Clash continues to be honored by the work of The Joe Strummer Foundation, which gives opportunities to musicians and support to projects around the world that create empowerment through music.

“Now, more than ever, we need to stand united and not be divided. It’s for this reason that we support International Clash Day,” said Steve Mullen of the Joe Strummer Foundation. “Anyone with a modicum of humanity can appreciate The Clash and the impact they had on the world.” During the late 70s and early 80s they definitely earned the slogan ‘The Only Band That Matters’. Back then, political and social differences were being pushed to the extreme. And now the same is happening in many parts of the world, except this time we have social media to amplify & confuse the truth. International Clash Day ensures new generations are aware that the band, through Joe’s snarling lyrics, called out the conspirators and united the people to stand up and be counted. As Joe Strummer once said: ‘Without people, you’re nothing’ and never a true enough phrase has been spoken.” 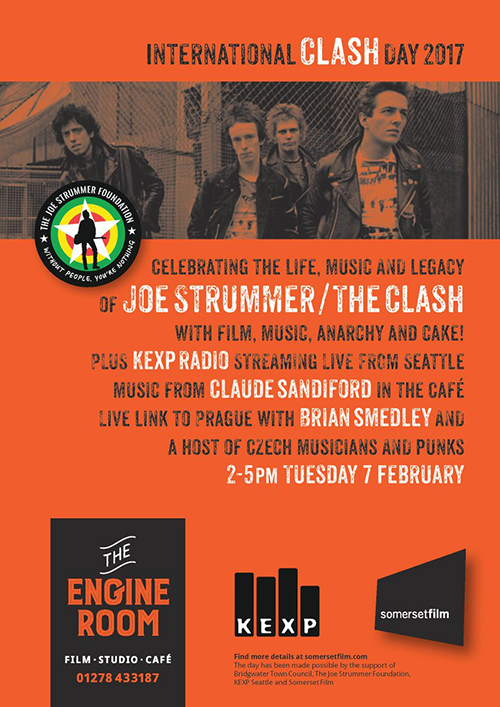 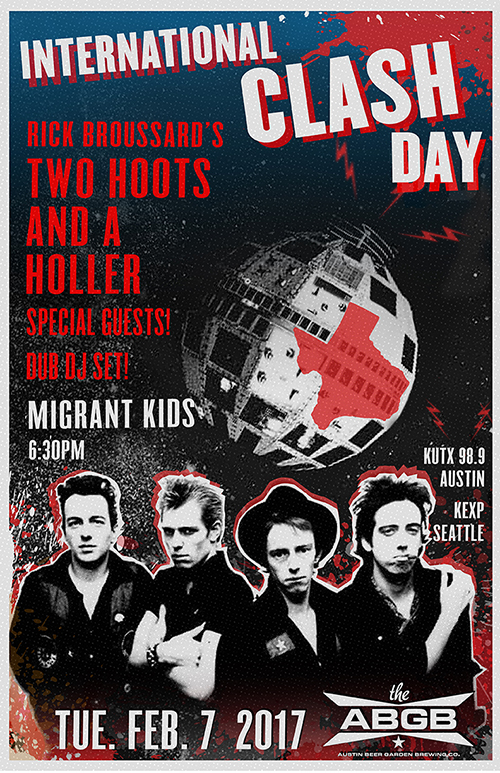 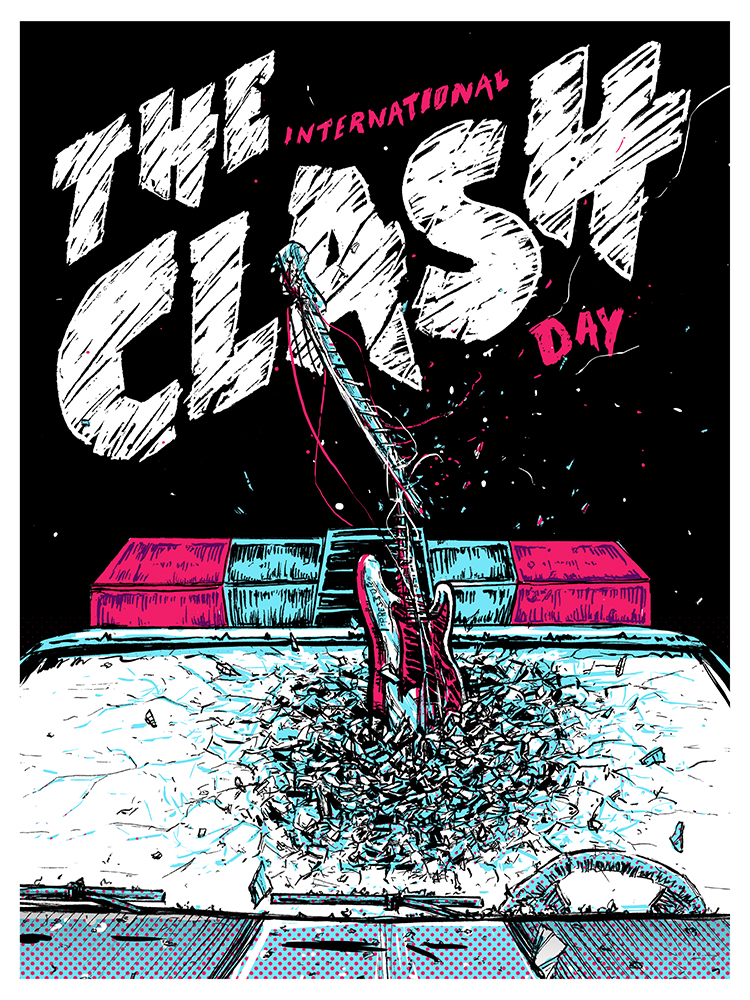 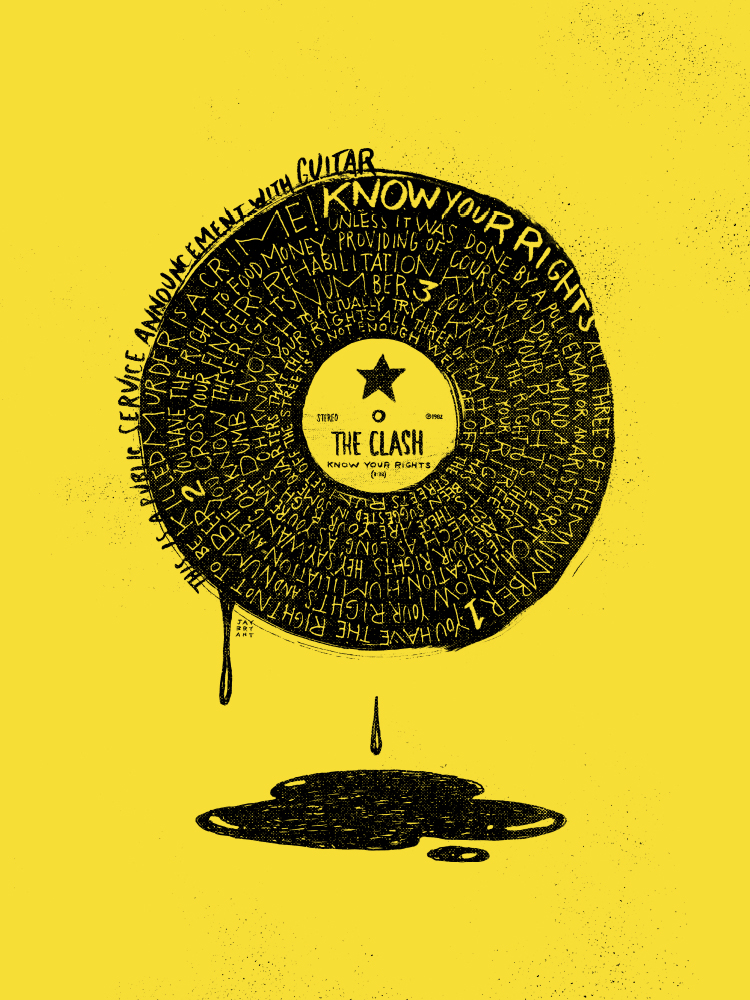 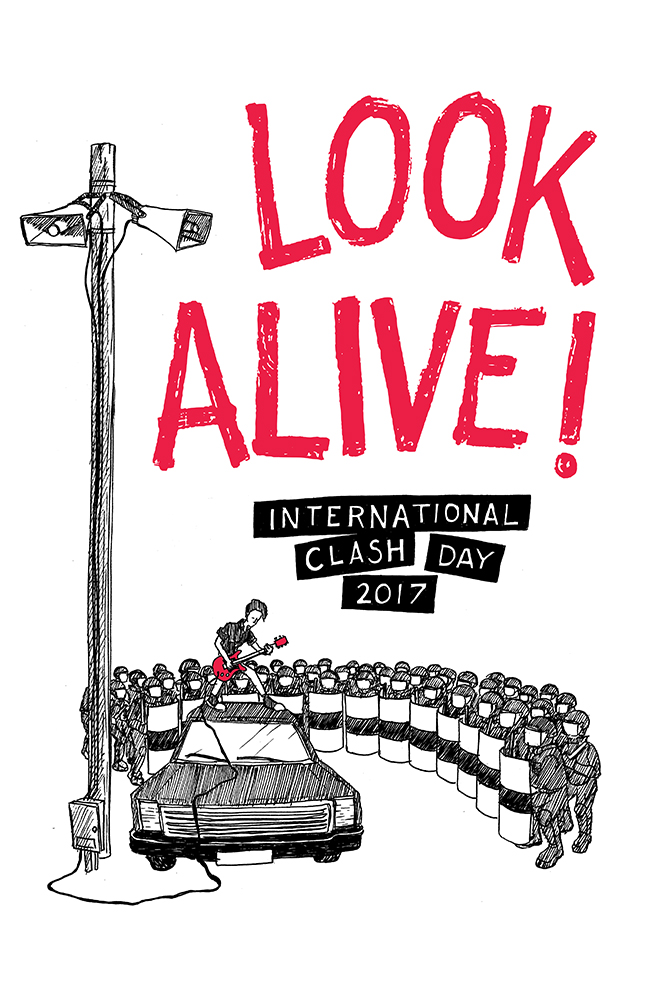 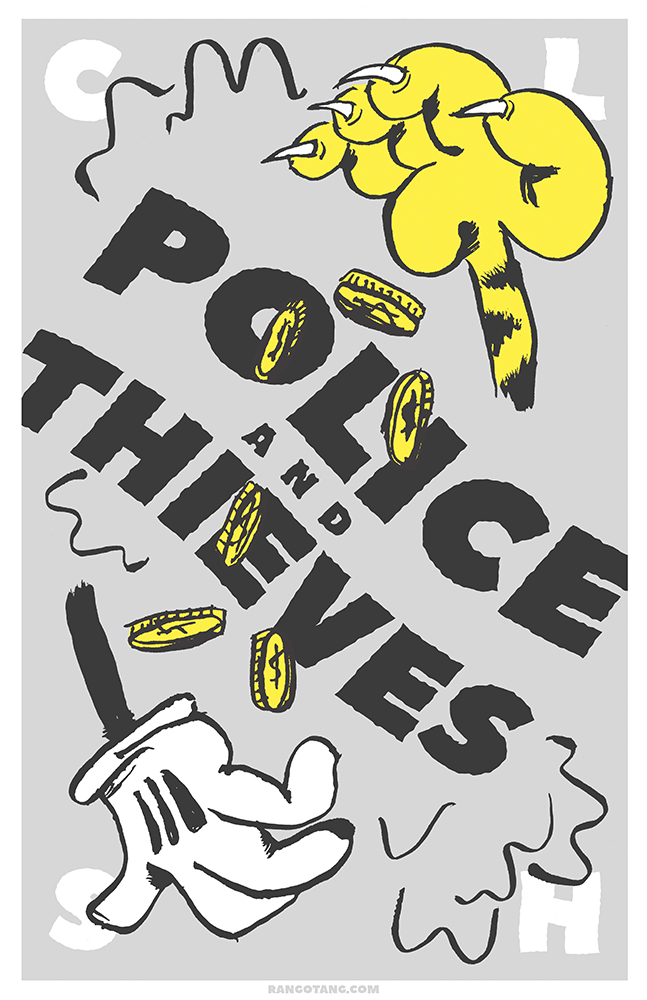 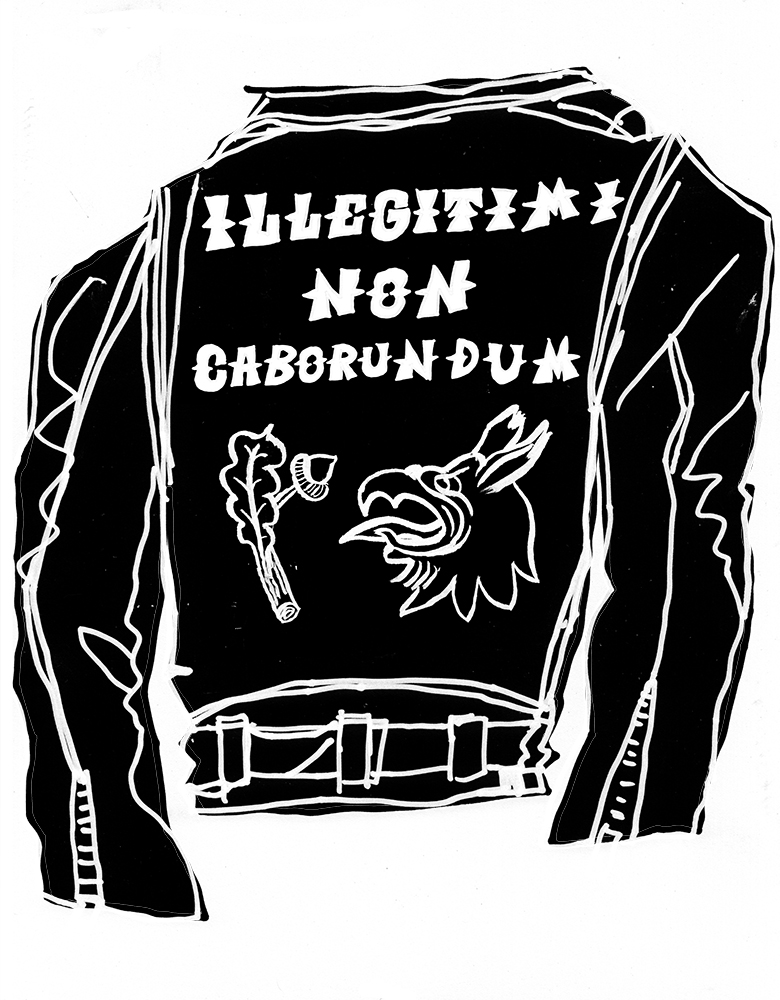 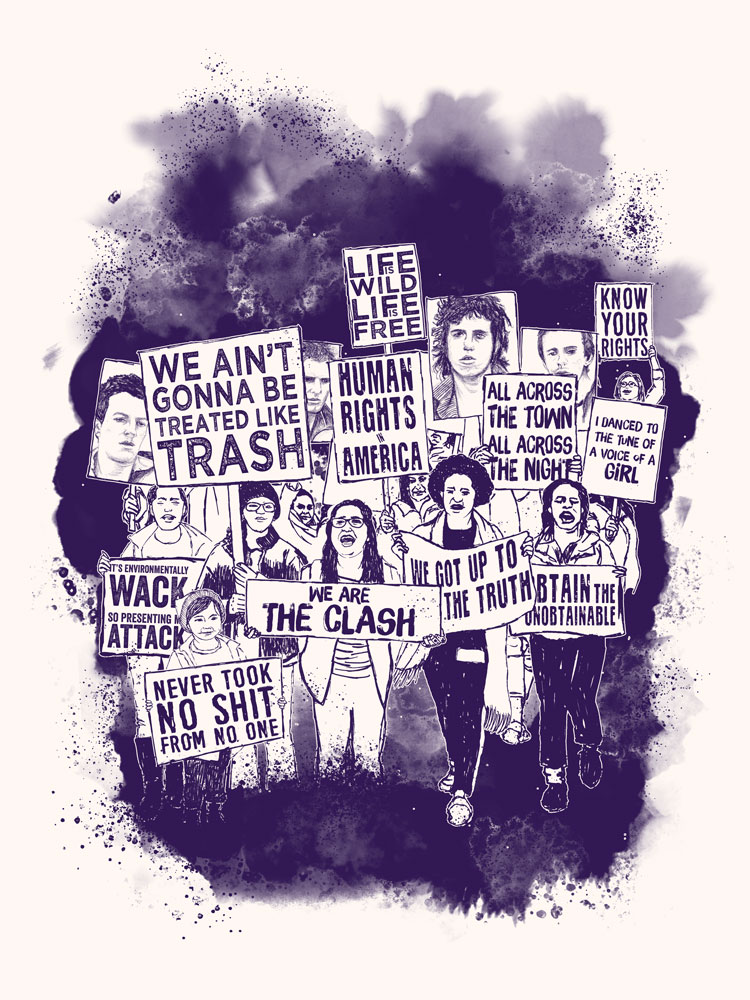 Look at this gorgeous new print Posted on January 27th, 2017 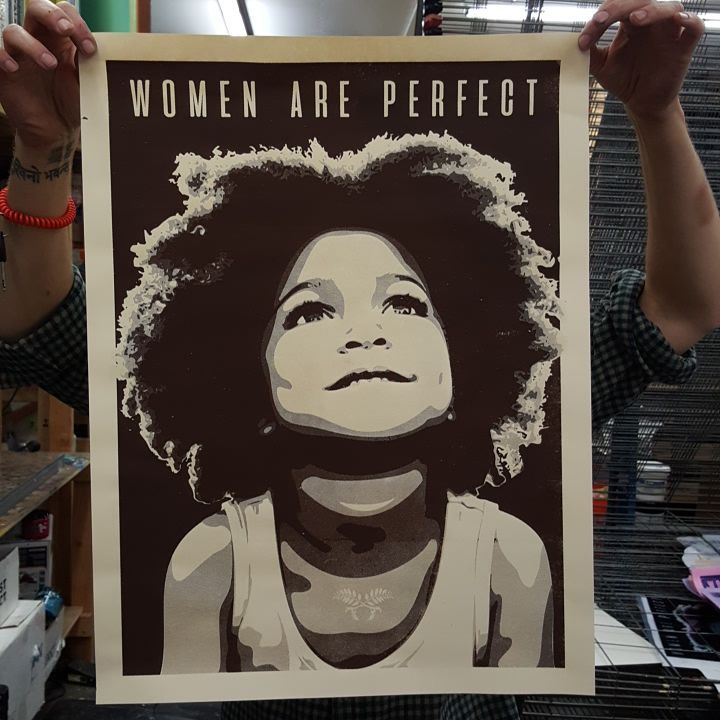 This amazing design was created by Jessica Sabogal who you can come down and meet at CoCA Gallery 6-9 PM Thursday February 2nd as part of Pioneer Square Art Walk!

“Hear Our Voice” is an exhibit that will feature this piece, as well a massive amount of other pieces created for The Amplifier Foundation as part of their support for the Womxns March on Washington and in Seattle.

We will be at the Opening, printing small(er) versions of this image in a live print demo that you can take home (while supplies last), or try your hand at printing yourself! All in support of of CoCA and The Amplifier Foundation!

Much more information at the CoCA Event Site